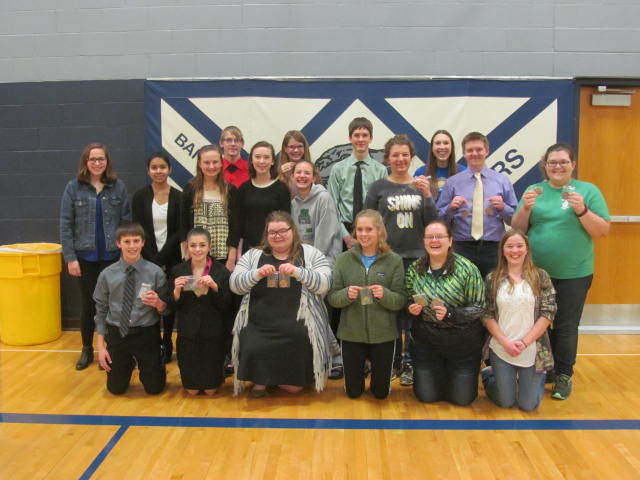 The Wisner-Pilger speech team earned fifteen finalists as well as two championships at the Bancroft-Rosalie invitational  Saturday.  Junior Veronica Peck led the Gator efforts with three medals, leading with her third informative championship this season along with runner-up silver medals in poetry and persuasive speaking.  With the informative gold, Peck set a new school record with nineteen career championships, breaking the previous record of eighteen she shared with past Gator speech greats Luke Evans and Kristin Schlickbernd.  “Veronica’s had an amazing career, and she’s got a long way to go,” noted Gregg  Moeller, Gator speech coach along with Kasey Alexander and student teacher Kristin Jindra.  “She’s leaving an amazing legacy, and she’s barely half done.”

The Gators’ other championship effort came from the oral interpretation of drama team of Claire Raabe, Megan Schroeder and Becca Thompson, who took first with their interpretation of “Enter Three Witches”.  Jessica Svoboda took runner-up honors in informative speaking, while Thompson added a third place finish in persuasive speaking.  Three other Gator speakers earned two final medals—Aleca Keller, third in entertainment and fifth in extemporaneous; Grace Steinmeyer, fourth in extemporaneous and fifth in informative; and Jaden Berlin, fourth in poetry and sixth in serious prose.

Other results from Saturday:

The Gators finish the first half of their season Saturday at the Winside Invitational, which will be their toughest test, according to Moeller.  “With the snow, our inexperience and other conflicts, we’re still well behind other teams as far as being ready for a meet like Winside,” Moeller said. “Winside features some of the strongest teams in the state, and we need to be at our best to be competitive.”